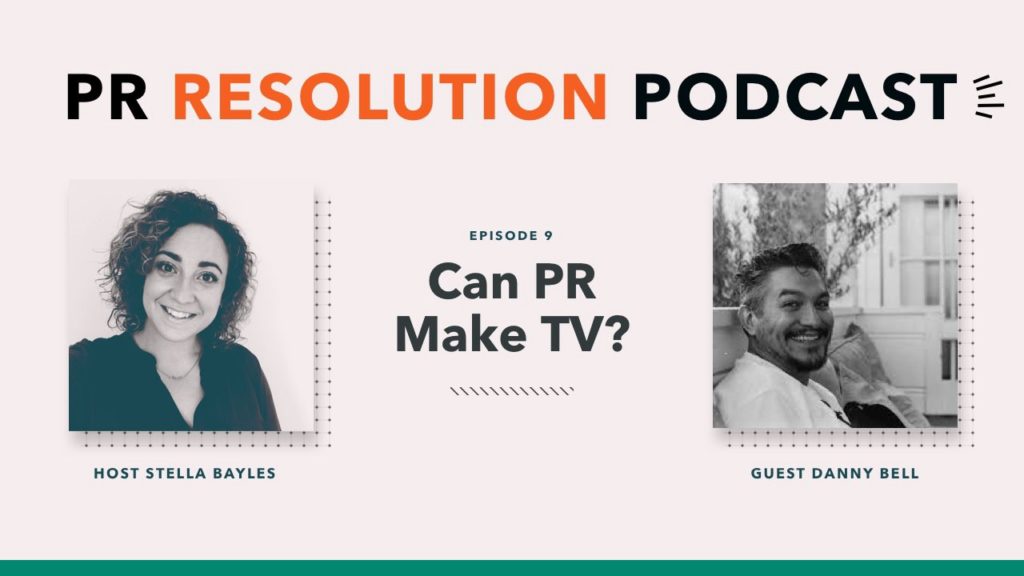 You could say that the relationship between PR and TV is facing some tension at the moment, what with the move to more on-demand and online content. With the change in how we’re consuming TV and the merging of PR and other content, we’re in a unique space where brands can reach consumers in so many different ways — but is TV still a valid way to do that?

We recently had the pleasure of chatting to Danny Bell, a video director and producer in the UK and US. Having worked on popular shows like Big Brother and Love Island, worked featured on major TV channels, and experienced working with both agencies and brand teams, he was the perfect person to have this chat with.

We asked him about the development of TV and online video consumption, the change in brand involvement in TV, and how audience engagement is leading the change.

Have you ever seen examples of brands involved in TV? More specifically, have you seen any examples that have worked?

There’s been some really good examples recently of brands sponsoring TV shows, like Superdrug sponsoring Love Island last summer. They sponsored the TV program and all the spin-off media around it. The Love Island podcast, for example, got way more views than the World Cup podcast, and those podcast hours counted as programming hours that were drawn up in the contract with Superdrug.

The brand thought they got enough engagement in terms of hours delivered thanks to the combination of the TV show, the podcast, and other content around it.

In terms of shows made by brands — no, I can’t think of loads of examples. I think part of that is because there’s still snobbery in certain channels (there’s this idea that if something is bought by a brand it’s going to be shit). Ad funded programing is looked at as a kind of second tier product generally.

Another reason for this is that there are still pretty strict rules and regulations around product placements within shows, so there are some hard limits on how brands can integrate into shows in the first place.

Going back to your experience, at what point in the production process does a brand get involved?

This won’t be a massive surprise, but things aren’t always paired up in the most efficient way.

Generally within a TV channel there will be a separate team working on sponsorship deals than the editorial team.

I remember a few years back I made a show for Sky with Rihanna that had Rihanna as an executive producer. At the time the show got commissioned there wasn’t a sponsor. But, halfway through shooting the show, Sky did a deal with Diet Coke who then became the official sponsors. This meant the only drink that could be seen on the entire show was Diet Coke — bear in mind we’d already been filming for six weeks with participants drinking all sorts on set.

We ended up sending the finished product to a special effects company to turn the other drinks on the show into Diet Coke. You totally wouldn’t have noticed, but it would have been much easier to have had the conversation with Diet Coke earlier on in the production process.

Are you ever involved in the conversation with a brand and whether that was successful? How do they actually measure success with that?

I use to do a lot of work for Adidas, making football content for them that worked well online. I kind of thought, well this should be on BT Sports and other sports channels, but the issue there was, because it had come from the agency world, there were too many people involved to have a simple, straightforward conversation about getting it put on a TV channel.

In my experience of doing that, I haven’t been involved in a project where everything has been truly lined up. A lot of these conversations happen a bit too late.

When you’re creating something like that, has there been a conversation around the audience and the distribution of that content?

That’s the one thing that the agency and brand universe are way ahead of: knowing their market, knowing their analytics, and knowing how people are engaging with things.

If you’re a sports brand and you’re launching a new football boot, you probably want to sell more football boots. Those conversations as a content maker and program maker are so important, even just so you know who you’re aiming the content at and what the brief is so you can actually sell some of those football boots.

In TV, you’re driven by the creative and there isn’t really that brand involvement so it feels a little less targeted.

I think that’s probably why we’re seeing brand teams moving into more branded content and editorial sponsorship, because they can see more return I’m guessing. Looking more into that area, when you’re working with these teams are you finding out what kind of targets they have? How much information do you want to see?

I like being told what the aim is. The more I know about what they’re trying to sell and where it’s being placed, the better. When I worked with Adidas, they were really good at knowing everything we were delivering. We knew about all of these things and that everything was multipurpose — there was stuff for Snapchat, YouTube, Instagram etc.

Some of the stuff I used to do with Adidas was unique in that it was primarily digital, but also I used to work on a show that got played in Adidas stores around the world and on screens at stadiums. The stuff we were shooting had to be used in such a multipurpose way that you could never have gone in not knowing that. It would have been a nightmare trying to repurpose it afterwards for all of those things if you didn’t know where it was going to be placed first.

That example you’ve just explained there makes a marketer’s eyes light up. That amount of content and who can engage with it is just huge. And then you say that someone comes in especially to film for Snapchat. Is that a new thing for you or has it been happening for a while? How involved are you with that?

They had a clear brief and were capturing stuff to specifically go on that platform. It’s very different to the way that TV has traditionally worked. TV is moving on in some ways, but nowhere near quickly enough. The way TV shows work is that digital is usually an afterthought.

TV audiences are getting older and older and I’m finding that digital is becoming less important because the audience aren’t people who are on Snapchat or Instagram. Take the X Factor, for example, which has less digital stuff now than it did a couple of years ago.

You have been involved in big budget shows and high quality production. How do you feel coming from that background when you see an influencer video that’s just been filmed on an iPhone being shared and doing really well?

I could talk about this all day. I come from a different standpoint from the TV industry. I don’t see that, because it’s been made on a phone, that it’s lower quality. I actually just see it as modern. I look at the stuff we make now that’s bigger budget stuff with more cameras and more edits, and to me it’s more about where that stuff is going to end up. If you drop that on a social platform, it just looks fake.

Whereas the influencer in a room doing a makeup tutorial with no editing gets 10 billion views — that’s real content, too.

If I was in that PR team, I would be thinking about not going down the TV route, especially because we have to measure our work.

In terms of watching TV on an actual TV, it’s very difficult to get the analytics on that simply because the way they get their ratings is so archaic. It’s way better if someone is watching through a digital platform, you get a bit more information about how many people are watching and who they are.

Even the way Instagram works now, you can get really detailed analytics — you don’t get that from TV.

Just on that topic, you mentioned the Adidas example where they invited in the guy to film for Snapchat — was that a one off or does that happen often?

When I’ve worked with bigger brands that are working with bigger budgets, that happens a lot. From a traditional background, production values relate to the value of the camera, and a lot of the time that’s still the way you’re working. But now, if someone’s flown in with an iPhone to shoot for Snapchat, it’s easy to think it’s a waste of money, even though I maybe wouldn’t have batted an eyelid on that cost if it was on, say, a new camera.

But when you do stuff on Instagram and Snapchat, you’re hitting multiple platforms and getting more eyeballs.

It depends. If I’m working directly with an agency, it’s a bit more joined up. If I’ve been brought in as a director, it’s not so joined up because you’re just concentrating on your bit. As with everything, the more joined up and the more communication there is, the better everything is.

Do you get the results or reports sent back to you?

If you’re doing a job in an agency, then yes. They’re all over those kind of analytics. If I’ve just been brought in as a director, it’s more of you go in, shoot your thing, and disappear.

However, if that’s the case, I’ll be all over YouTube or Instagram to see how many likes it’s getting if I don’t get that information from the production team.

We all should be obsessed with data because, for the first time ever, we have access to such a huge amount of it. No one really knows who’s looking at a piece in a print magazine, but we can easily find that information out for pieces on digital platforms and it’s amazing.

Listen to the whole podcast with Danny on The PR Resolution podcast.