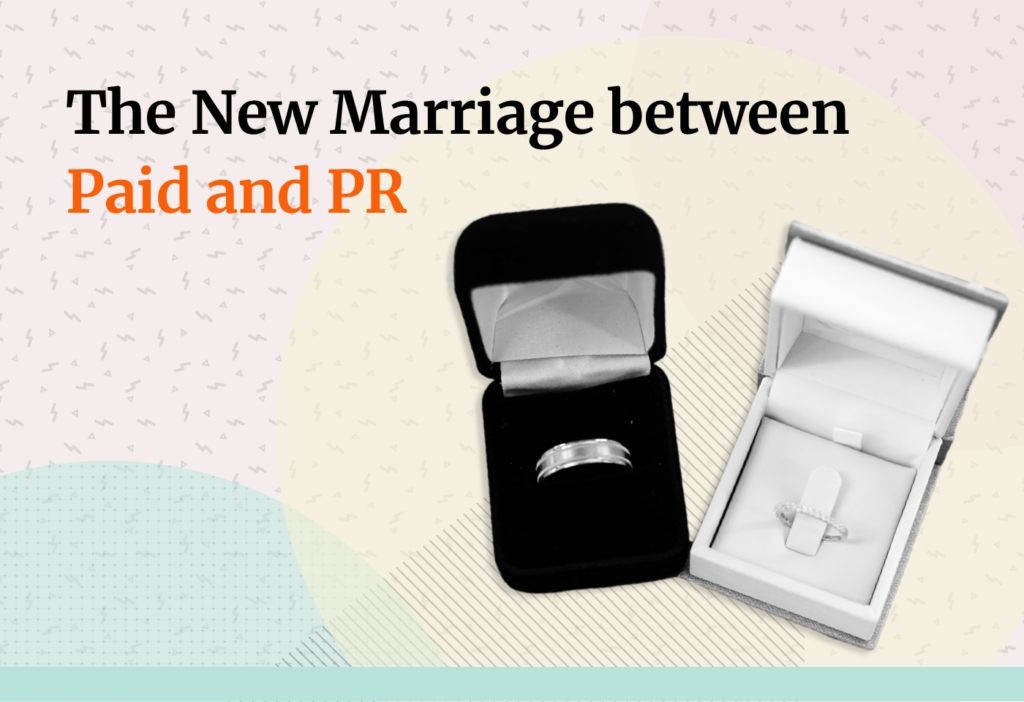 Within the PR and advertising industries, there’s often talk about the PESO model (paid, earned, shared, and owned media). We group these different forms of media together in a catchy acronym, but they are they working seamlessly?

For PR practitioners, paid promotion can sometimes feel like the black arts, and vice versa for those who work in paid media.

We recently spoke with Jerrid Grimm, co-founder of Pressboard, a company that brings paid and editorial PR together, about how the lines between PR and paid activity are blurring.

The Ability to Measure Sets Paid and Editorial Apart

On paper, the glaring difference between paid and editorial PR is that one is paid, which means that placement is guaranteed. However, Jerrid claims the less obvious difference (and a major advantage) of paid media is the ability to measure it. This often makes it a more preferable marketing activity, because it seems a lot “safer”.

This is even more prevalent online, where everything is far more measurable.

With paid you can easily measure results by putting either a pixel or a script onto the page you want to track (if you have access to the backend, of course).

With earned, while you can ask the publication or influencer you’re collaborating with to share that number (although in most cases this is almost impossible), it’s far more difficult and, in many cases, you cannot guarantee how many people will see a story.

There tends to be a lot of guesswork involved in PR because, while you can get a rough idea of how many people view a website a month or the circulation of a magazine, you don’t know for sure how many people will actually read your story.

Jerrid says to think about it this way:

However, it might have hundreds or thousands of pages, where only 5% get the lion’s share of views. Your story might be published with the expectation that it’ll get a proportion of those monthly views, only to learn that it received just 200.

This lack of ability to measure how well a specific page is going to do has led to some number exaggeration — we only have to look at the AVE controversy to know this.

However, Jerrid explains that we’re seeing a lean towards other metrics, like social media shares, likes, and views.

With paid promotion, you’re essentially paying per person who sees your story, so you can pick the reach you want and adjust your budget accordingly. There’s usually a guaranteed performance you can count on and it’s far more consistent than editorial PR.

PR and Paid Are Merging

Paid promotion and editorial PR come from two very different backgrounds and skill sets but slowly we are seeing them merge.

If you add some paid activity to your PR campaigns, you can really maximise the output.

In our chat with Jerrid, he briefly covered his brand, Pressboard, and how they’re bridging the gap between the two different sides.

It’s essentially an ad technology that allows brands to promote their earned media by paying for it. Instead of a publication hitting publish on your story and letting it gather dust in the depths of their site, you can refresh it and bring it back to people’s feeds by injecting a bit of money into it.

Pressboard isn���t the only company which is helping promote PR activity. There has been a rise in the use of PRs using companies such as Outbrain to further promote their editorial coverage, and we are likely to continue to see this area develop.

While these kinds of tools have been around for a while, Jerrid can see why the uptake of paying to promote your PR is fairly slow.

“One big problem stopping this change is that PR has always circulated around the idea that it doesn’t need money, it earns it,” he says. “We’re still transitioning from this mindset, which is why it’s still very rare that you’ll see PRs managing paid promotion.”

“When you spend ages on the PR side saying we don’t need your money, it’s hard going back to say that you actually do,” says Jerrid, referring to traditional PRs who prided themselves on gaining coverage with little budget.

Meanwhile paid activity is leaning to PR too

PR is leaning into paid activity to help with measurement and consistent delivery. Advertising is also learning from PR. The industry is becoming more consumer-centric as the general population become savvier to forceful marketing messages. This means even paid advertisement needs the hook of a good story.

“There’s a move away from interruptive-style advertising like banner ads and more towards this draw of marketing,” Jerrid says, adding that we’re seeing brands favour content that’s people actively come to because it’s interesting.

Without the starting point of an interesting story, neither paid promotion nor PR will work.

This is where PR really thrives.

It’s one of the only practices that, for hundreds of years, has been solely about storytelling — and that isn’t changing anytime soon. This means it goes hand in hand with content marketing, where the goal is to pull visitors to a site through thoughtful, insightful, and educational content.

The Difference Isn’t So Different

The difference between paid media agencies and PRs is primarily a difference in belief systems.

Someone who thinks that marketing is more powerful when it comes from a third party is going to butt heads with someone who thinks you shouldn’t have to earn media placements if there are avenues to pay for it.

However, with the changes that are happening, brands are starting to power up their stories by incorporating both PR and paid activity.

They are beginning to take earned media (which Jerrid claims “becomes an asset” as soon as it’s published) and turn it into owned media to prolong its life.

That might mean republishing it on your blog, sharing it through your newsletter, or linking to it from your social channels.

However, what you really want is the third party publication to keep sharing it.

If you get a placement on the New York Times, you don’t want them to Tweet it once and then never mention it again, right?

You worked hard to get that placement and you want to keep reaping the benefits of it for as long as possible.

These Are Exciting Times

The convergence of paid media and editorial PR is an exciting one that brings many possibilities with it. Not only should we see more emphasis on measurement in the future, but we’re also likely to see even more creative ways PRs can leverage paid and editorial PR.

If you want to hear more about Jerrid and his thoughts on how to make your PR news story last longer, download the podcast here.