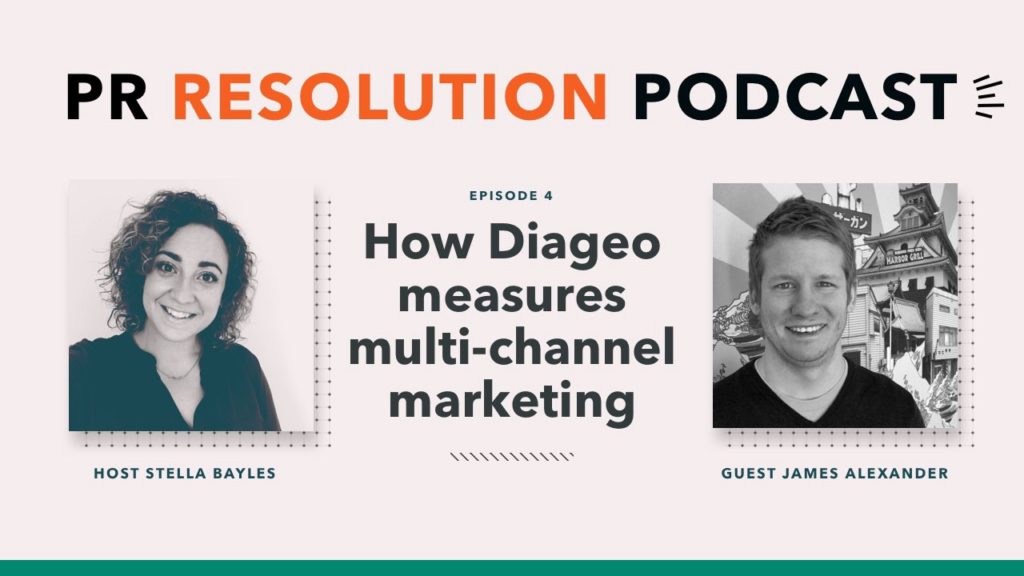 We had the pleasure of catching up with James Alexander, the Head of Influence and Advocacy at global drinks business Diageo, on the PR Resolution Podcast to talk about multi-channel marketing and measuring results.

James digs deep into standardising reporting processes, specific measurement tools, and how insights can be used to fuel future campaigns and budget decisions.

Let’s talk about the Paid, Earned, Shared, and Owned (or the PESO) model. How is Diageo working with that?

We describe ourselves as a support team that operates a bit like an agency. There are various different drinks brands across Europe that we work with, and the different brand teams — whether that’s social, digital, or events — come to us for support.

I’m responsible for the measurement side of things.

The acronym of PESO sounds simple, but it can often be quite complex. Are there campaigns where you have all of those four activities running at the same time?

Absolutely. We don’t actually run the exact PESO model; we’re basically working with an adaptation of it, and most campaigns touch into those different areas. It’s a really good way to boil down your outputs into specific categories, and we’ll often have a range of things happening for any given piece of activity.

In our version of the PESO model, the first thing we have is partnerships and collaborations. This is anything we’ve built with another party that we have essentially created through collaboration. We then have owned, which is our own brand channels, like websites and social channels. Earned social is anything on social media that isn’t owned. So this is when consumers talk about our brands online. Then finally we have media coverage. This is the traditional PR space or editorial media covering the work that we do.

Do you have a number of other tools measuring the other channels?

We have an agency that has developed a framework and, within that framework, there are a number of different tools, like Sprinklr, Digimind, and CoverageBook. If there are other areas that have developed good results, we’ll manually pull in the data from those into excel documents.

It’s the combination of these all coming together to create a full picture.

So why are you measuring in that way? What actually happens with the outputs of this method?

We’re basically making sure we can have good, standardised data that we can compare and contrast. It seemed like a relatively straightforward thing to do, standardising the data we have. We have more than 15 brands across Europe, and it’s useful to be able to compare one brand’s activities in one country against different campaigns.

It’s all about standardisation. This essentially operates at a level of outputs. We’re talking about gathering data that lets us know things like impressions, engagements, sentiment, and efficiency scores, like cost per thousands. The framework we use is an adaptation from AMEC.

We gather all this data under the heading of “outputs”, but it’s only good to a certain degree because we have to make sure we’re getting “outcomes” as well. That being said, outputs are a good place to start. You can ask “how much did we pay for this?” and “how much were the outputs?” These are important things to know.

We then feed that data into our econometric modelling to see if we can find trends. We see whether all the impressions and engagements we’ve generated end in the most important metric, which is driving sales.

So you’re looking for correlations between the two?

It’s worth going back to the econometrics methodology, I think.

It’s not something that’s a normal line of measurement, is it? Can you let us know more about it?

Econometrics, or MMM (Mixed Market Modelling) is a methodology that looks at what all of the total marketing spend and activity you’re doing correlates the most with driving sales at any particular point in a campaign.

You can take one part of a campaign, like paid advertising, and see whether it correlates with sales. Obviously, there are loads of different factors that can affect this, though, like price promotions and even the weather. Take one of our brands, Pimms, as an example. It’s a seasonal product, so discovering whether the sales were driven by specific promotions, marketing methods, or the weather can be tricky.

But once we know what’s worked, we can do more of that next time. It can be difficult to drill down when there’s a lot of different parts but, if you’re spending money across all the different marketing channels, you need those kinds of insights.

How long has your team been measuring marketing in this way?

It’s my job to look after the measurement side of cultural entertainment work, and that process has been going for about 18 months. Before that, there was measurement taking place, but it wasn’t standardised or as credible as it is now, and the quality of data we were looking at wasn’t as good.

Throughout those 18 months, the process has constantly been evolving. We might decide to use one kind of metric and then, three months later, there might be a new tool or something might come up on social media that shows we need to change it. Then everything changes moving forward, and the data we had beforehand needs to be altered to align with the new method.

Take Gordons in Great Britain, one of our brands, as an example. We can look at how much has been spent and break it down into the different work streams. There might have been a summer campaign, a press campaign, or an influencer program, and we can look at each of those lines and see how much we were spending in each area. We can then look at whether we were spending half the amount on one campaign but delivering twice the amount of output with it.

That’s when we can get to a good place.

It’s easier then to kill the second or third activity which isn’t driving as many sales as the others.

So have you changed your activity based on the last 18 months research and analysis?

Absolutely. It’s more at the smaller, granular level rather than macro level, though. We haven’t said “right we’re going to get rid of the press office entirely” or “ we’re going to eliminate all influencer campaigns”. It’s at a campaign level that we’ll make the changes.

At the moment, the AMEC model, and where a lot of the centre of gravity around measurement conversation is, relates to the outcomes vs outputs equation.

On the one hand, we’re on a drive to get better outcomes. To do this, we’re looking at bespoke studies and bespoke measurement, asking ourselves questions like “did this bit of activity do well based on its original objective?”.

We have found instances where the output looks very good. It might have been cost efficient with us spending X amount, but it may not have driven the outcome we were originally going for. Being able to tease those things apart is important, and then making balanced decisions about what to swap in and out based on that.

Were you involved in measurement or analysis in your previous roles?

No, not beyond the standard process of concluding work and putting it through a reporting process. Nothing as thorough as the work I’m doing right now.

Some of the work we do is quite sophisticated, and we’ve developed a specific methodology to extract everything in a standardised and credible way. A lot of the work is the basics, like standardising processes and getting people to talk the same language.

Are you able to share any of the metrics you have used to standardise that process?

What we’ve tried to do is to create one single metric that is a proxy for reach, which we call visibility. This is a standardised unit of reach and a really key metric for us. If I see a piece of activity, I can see how much has been paid for it and what has been delivered, and that’s the most basic unit of output measurement.

It gets more sophisticated because we’ve put in a lot of effort to make this “visibility” unit equivalent to paid impressions. If I’m dealing with a paid media team running a separate campaign and they say that X million people saw this, the data that we are talking about is comparable and contrastable to that data point.

When you work within marketing, putting a figure of a billion into a report will not go down well. It doesn’t do anything for our credibility. Standardising that process is one of the key metrics we have in there, but beyond that it’s the usual stuff we’re looking at, like engagement, efficiency scores, cost per thousands based on earned impressions, etc. We have a suite of those standardised metrics that we look at regardless of what the activity was trying to deliver.

The only pushback is that someone might have a very specific thing their activity is trying to deliver against that the visibility metric is not a good proxy for. This is why the framework we’ve put together is split into two: standardised metrics and campaign specific metrics. The latter is where the brand team and individuals working on the campaign have a greater bandwidth to say what would be a good measure of whether the activity is performing well.

How does earned activity and media relations fair in this kind of measurement?

One of the holy grails of doing this activity was getting to that place where we could say that, pound for pound, earned and paid were performing the same.

For some campaigns, the efficiency is better on earned content and other times on paid. You can then start to determine why that’s the case and why that activity got that certain result.

You have really progressed your career and it seems you have become very analytical and data-oriented, what are you reading or have you got any tips for people who want to develop these skills?

I sort of stumbled into the role. It didn’t come from a pre-existing interest that I went after, so a lot of the learning I’ve done has been on the job. Like anyone who works within marketing, you should have a curiosity for whether your work is delivering. It’s an area that can be really confusing as it’s jargon heavy, but it shouldn’t be because ultimately it’s a simple outcome you’re trying to get.

I’d say just be curious, challenge things, and ask questions. Really interrogate and make sure you’re getting as much out of your reports as you can.

AMEC is the most brilliant resource; we’ve taken an adaptation of their framework which is being deployed across over 250 people. That was done by literally just taking their best practice and altering it to fit our needs. Trade press is also a good resource and, on social media, make sure you’re following people who know their stuff from a measurement perspective.

There are so many great tools out there as well. Having conversations with the people who are making them can be really good, as those conversations might pull you in a direction you hadn’t thought of.

If this has piqued your interest, James will be speaking more about his measurement process at The AMEC Global Summit in Prague this May.

You can listen to the full interview with James on the PR Resolution Podcast here.