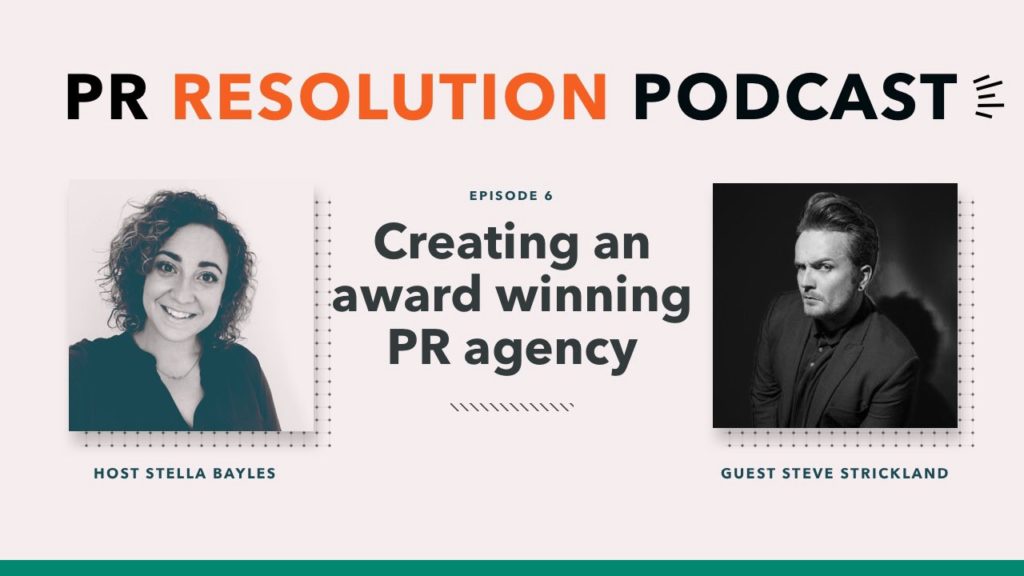 We got the chance to talk to Steve Stickland, co-founder with Gary Wheldon of new award-winning PR agency Talker Tailor Trouble Maker, about starting an agency, standing out, and creating campaigns that have the “wow” factor.

After the recent success of Talker Tailor Trouble Maker’s pre-Christmas campaign for Deliveroo that helped find three missing people, we were excited to dig into the reasons why Steve decided to kick out on his own, how he weaves diversity into the workplace, and why he believes PR has the power to genuinely change the world.

You’ve gone from a creative role to starting an agency from scratch and hiring people. How has that been?

I would say it has been two and a half years of massive ups and massive downs. The entire reason we wanted to do this is because we felt like the model was broken and that we could get in there and fix it.

Gary and I were in this situation in an agency at one point where we were told not to go into a pitch because it was with an Emirati client and we were a bit “too gay” to pitch. It was at that point that we were like “yeah, this model isn’t working for us”.

We felt like we needed to do something much bigger. We needed to stop having meetings about diversity and just start doing stuff. We wanted to get out there and talk about fairness, youth culture, and everything we believed in. We knew we wanted to try a new model where we are entirely transparent with all our billings. We don’t run a timesheet model, we run on a promise model.

But we also want to deliver loads of content for our clients, so we’re doing that too.

If we don’t create enough content or it doesn’t hit the spot, we want to be in a position where we can say “let’s try that again” or try something else.

At the start we went out and got an investor. What I didn’t want to do was go from being a global creative director to all of a sudden feeling like I was doing every single role in a business.

We also needed to stand out. We didn’t want to be a startup that nobody knew. We wanted people to be like “okay these guys are serious”. That’s why we picked our name, because it’s different to everyone else.

It’s usually around the five year mark new agencies start winning bigger brands and awards, so you’ve broken the mould there. How have you won those brands? Have they already been contacts?

I think we’re just really good at PRing ourselves. We think and we feel fresh and different. We basically forced ourselves into the conversation by being opinionated and by turning up to PR awards in full glitter because we wanted to be noticed.

You’d be surprised at how many big brand directors would come up to us and say “you look fabulous”. I think we just came across as fresh and enjoying it and loving and wanting to work with brands to do really wicked stuff. I’d also made friends in the industry and I didn’t want people to think that I’d left one of the best roles in the world to start something that wasn’t successful.

When you set about really starting the agency and thinking about how it was going to run, did you have a strategy for the kind of PR you would do?

We always said we didn’t want to specialise. I had some of my greatest leaps when I moved agencies and I think people are wrong when they want someone working for them for years in the same role. We wanted people to get as much experience as possible with us.

Back in the day, I was moved around to different departments and then started to find my lane. That for me was a really great lesson.

What I really want to be is an agency that’s called upon. My biggest inspiration is Adam & Eve, because they came in and upended other agencies by taking their current advertising and re-inventing it.

Our thinking is we are small, we are nimble, and we are quick. We want to do something different and try something new, and you’re either up for it or you’re not. For a lot of big brands there had become this lethargy of consumer comms all looking the same, so they’d go try different agencies but get the same result.

The agency that I want us to be is the one that says “alright, now for something really different”. We can still deliver those safe comms because being present is important, but we can also do the bigger, more fun stuff.

It was difficult in the beginning because you’re essentially asking someone to take a chance, which isn’t easy for someone who has to pay their bills. We had to tell people there was money in the bank and that we had investment just to get people to give it a go.

We became a bit of a home for people who felt disillusioned with other agencies and there were a lot of comments we got around how people were treated previously. The only hiring policy I’ve ever had is I think it’s important to look around the room and see someone else who looks like you.

As two gay men, Gary and I can share ideas coming from that angle, just like it’s important for church-goers to have someone else like them to bounce ideas around with.

We work with a charity that helps us place interns, and one of the interns we had said afterwards that we were the most diverse agency they’d worked with. And, while that was a compliment, it was also sad because that’s just how the industry should be as standard.

I feel like the energy in our business comes from the fact that I’m still a creative person but I’m not going to be the person to tell anyone what the cultural tipping point is anymore.

We don’t accept any CVs, we only accept 100-word statements about what you can bring to the agency. We also do a lot of intern programs which are mostly about attracting young cool talent. We’ve basically tried to make our business as welcoming as possible by doing things like having Wednesdays as work-from-home days, giving everyone their own laptop, and providing breakfast and lunch.

The important thing is we haven’t used this for the PR angle, though. The people that work with me are like my teachers and it’s important to help them thrive.

Are most of your projects traditional media relations or are you looking at social? What’s the makeup of each campaign?

It really differs. For example, we’ve just sold Direct Line a YouTube grime artist partnership, which is the weirdest thing ever. Everything’s very content based. Either we create a stunt or a partnership, we don’t do social.

I’ve actually had quite a few clients who’ve asked us to look after our social, but I’ll be honest: I’ve seen social media teams working all hours of the day and I’m not sure I want that vibe in the office.

The campaigns I’ve seen coming out of your agency have been very social. But I totally know where you’re coming from with the effort involved in managing a social feed. Obviously PR is social, but there’s also a whole customer relations side to it that’s sometimes not related to PR.

I basically think that Twitter is either a comedy platform or a customer service platform. If you can do beautiful photography — and that’s always going to be part of our brief — that’s great, but I still think the fundamental thing that PR does is getting the right people to talk about the things you’re doing.

What’s the future? What’s the plan from now on with so much success behind you?

The plan has always been that, but I think we’re a good 5–7 years off . The immediate plan is to get a new office, but really it has to be about the work. I have a genuine ambition to do something that changes the world and I think PR has the power to do that. If you can get the trust of a client and make a fundamental change to their business, that’s really exciting.

I’d also love to see the people in our business go on to do wicked amazing things.

The sale goal is interesting, not many people would be talking about that right now.

The thing is I don’t think anyone should be scared of or shy of their own ambition. I didn’t start this business to be a small startup, I started it because I genuinely think we can change the industry for the better and make it more appealing to people who haven’t been in this industry before.

You can listen to the full interview with Steve on the PR Resolution Podcast here.