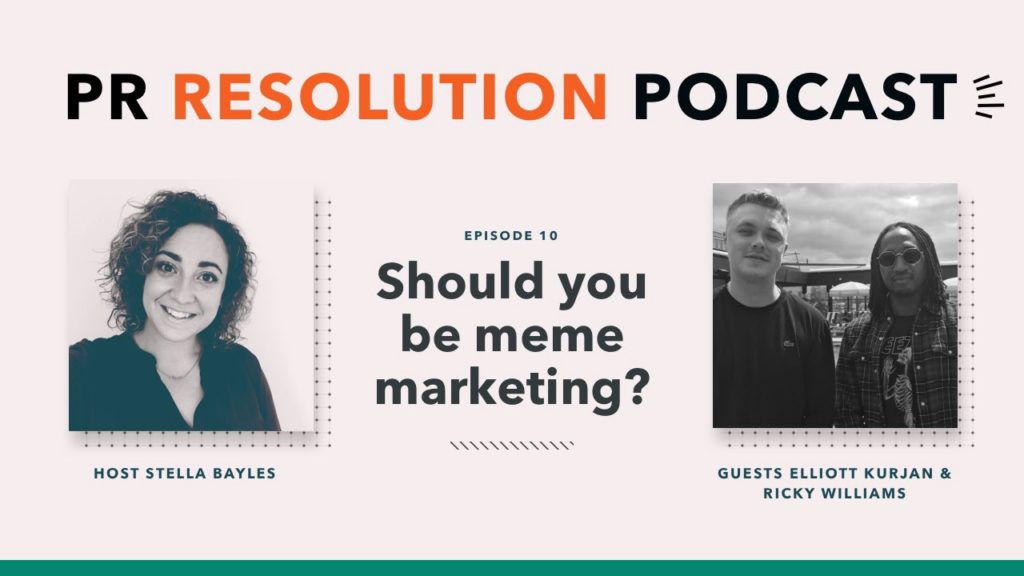 Memes are bigger than ever; the return of Love Island, Donald Trump’s visit, and Theresa May stepping down as Prime Minister all triggered a slew of fresh memes circulating on social media.

We chat about memes as an element of brand marketing, what it’s like working with big-name brands, and what kind of reach and engagement brands can expect from meme marketing.

We live in a meme culture, don’t we?

I don’t even know who came up with the name. I remember when memes first came around and no one knew how to pronounce the word. But they’re a really useful way to convey information through image and anyone can do it. It’s not as hard as filming a video but it conveys just as much information as one.

Huge brands are putting loads of money into it and they’re doing loads of behind the scenes stuff without their names attached to it, too.

We did an interview with Danny Bell and he said Netflix do most of their online marketing through memes but they do it on the down-low. Is that true?

They definitely do it with Narcos on Instagram and Twitter. They have influencers, celebrities and meme pages share the memes just before the release of a new series in order to push and promote it.

They use a lot of the big American pages to push stuff out, too. These pages must have been paid to do this stuff but it all feels so natural like you’d be sharing that stuff anyway.

Coming from someone who’s worked in PR teams for brands, it’s a completely different way to communicate a message. Does it need a different kind of person to come up with memes?

It’s not going to be the usual, traditional marketers, that’s for sure.

It’s up to them to think of the idea and then pass it over to someone who’s been making memes because it needs to look organic.

As soon as it looks like it’s been made by a brand and it’s obvious it’s sponsored, there’s something in our brains that just detaches from it and we don’t want to relate to it.

Without revealing all of your secrets, how do you do it? How do you come up with meme ideas?

I only got the job at LadBible because the guy who owned it thought I was funny.

I was mostly making memes by myself at that point, but I knew the owner personally and I told him I needed a year in industry for my uni degree. He asked me to go and work with him.

At the start of that year LadBible had 1 million fans, and at the end it was more like 4 million or something. I decided not to leave, dropped out of uni, and made meme marketing my full time thing.

When you first started and you were given your first brief from a brand was it a challenge?

At UniLad I did branded content a bit more and I didn’t find it that hard. It’s not difficult to do what you know. The difficult part is the brand coming in and asking us to do what we normally do but also wanting loads of other stuff in there too.

It’s weird because brands come to us with an idea and we explicitly say that we don’t want to mention them at all, but they have to trust us that it’s going to get huge numbers and loads of impressions.

When we’re promoting films for example, we don’t like to mention the film as weird as that sounds. But when Suicide Squad came out, the cast came over and we did a two truths and a lie video and it was one of the biggest videos we’ve ever done on LadBible.

What is the best way for a brand to link themselves to a meme? Or how explicit should the brand be that they’re linked to it?

Not explicitly at all. A meme or video with a link or swipe up is usually the most effective way to do it.

There are now tools that Facebook has devised that are really helping. I did a campaign with River Island where we filmed funny sketches and published them with click throughs to what the people are wearing in it. This kind of software now is really helping, and Instagram does that as well.

You mentioned the first 10 seconds of a video is so important. With Instagram’s audience in mind, what needs to be in that 10 seconds?

The best part of the video is, say, the first 3–5 seconds. Whatever the funniest piece of the video is — even if it’s in the middle — I’d put that at the very start. Instagram users have the shortest attention spans, and that’s fair because there’s so much good stuff there. If we’re we’re not captivated right away, we don’t come back.

You guys have started your own thing. Can you tell us a bit about that?

It started a few months back now but we’ve only just properly launched.

We created Wagyu social, where we do video production, social media management, marketing, and strategy. I’ve got a lot of friends who have lots of followers on social media just because I’ve been in the Instagram game for so long, so we’re also really good at talking to influencers.

So the meme experts that you know, are they just funny people?

I know some guys who are just robotic and scour the internet all day but they don’t actually create stuff themselves. You have to be quick as well. You want to be the first person to create a meme.

Even when Theresa May quit, the memes were out in minutes.

I’m from a PR background where we learnt how to communicate in certain ways — do you think memes are something that should be taught to marketers?

Yes, because it’s a part of our culture so therefore whatever is part of the culture is a tool for marketing and promoting. Maybe we’re going to have some inhouse meme makers in every brand one day, but it’s definitely a new tool and a very effective, cheap tool at that.

If I came to work with you guys and we developed a meme that worked well, what could I expect in terms of success?

You know a meme is successful when pages that haven’t been paid to promote it start sharing it, and when people start tagging their mates in it.

It needs to do the rounds; it needs to go into WhatsApp groups. You need to see loads of tagged names in the comments — that’s when you know.

I saw recently that Instagram are testing the removal of likes. Do you think that will change what’s popular and what’s not on Instagram?

Also, Likes breed Likes, so if a post has loads of Likes, other people are more likely to Like it too, so it might change that.

Can you name some examples of brands on Instagram that are doing it well?

I think people like Joe Media (a sports brand who does social really well) and Paddy Power, the betting brand, are doing great. Their tone of voice, how quick they are, and how risky they are is brilliant.

There’s BarkBox, too, a monthly subscription box for dogs. They have over 1.5 million followers and their Instagram is sick. It’s just full of funny dog posts and they get tons of comments and Likes. They’ve got T-Pain involved as well, so they must be doing good.

Just quickly, if people want to work with you, how do they get in touch?

Go onto Wagyusocial.co.uk. Whatever you need for social media marketing, managing, and production, we’re your guys.

You can listen to the full interview with Elliot and Ricky on the PR Resolution Podcast here.