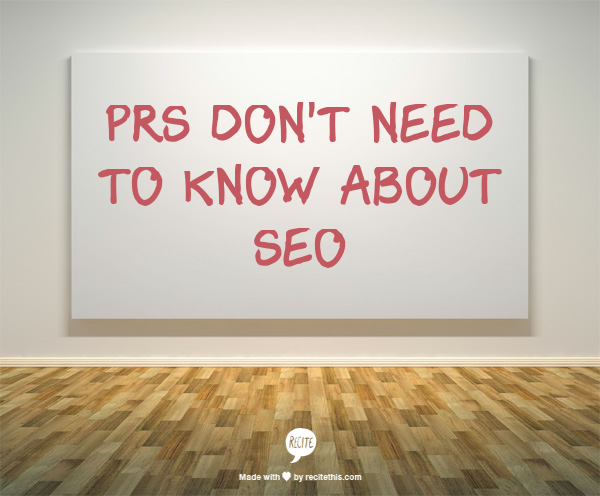 Seven years ago I oversaw the worldwide media launch of a Glasgow SME.

Bloggers would pick up on the news coverage. We didn’t need to bother with them, aside from whacking over a news release.

We delivered brilliant exposure for the client.

Page three of the FT, an hour on Sky News, wall-to-wall ITN coverage, Today, the World Service and the front or inside front pages of many of the world’s leading newspapers.

When we’d finished touring TV studios in London and the dust had settled, I grabbed five minutes to speak with client’s marketing manager.

She realised the power of media. She was delighted. But what excited her was, for me, an obscure and, to my eyes, unimportant piece on the BBC website. For her it was the most important aspect of the campaign. “Do you realise the SEO juice that gives our company Dave?”

I joined in the self-congratulating and empathised while secretly putting this down to the difference between marketing and PR people.

SEO had nothing to do with me as a PR man and it was my intention to keep it that way.

Do PRs Need to Know About SEO?

Fast forward seven years, and I wish I – and the rest of the public relations industry – had taken more of an interest in the evolution of search marketing.

But as Google gradually consolidated its monopoly status in the world of Search (now 90 per cent of the UK search engine market) and its increasingly sophisticated algorithm-updates placed more and more emphasis on content, so the divisions and synergies between the two industries both broke down and increased. The world is certainly a-changing.

Or so you’d think.

While recent research contradicts what I’m about to say, my experience doesn’t.

I can count on the fingers of two hands the PRs I know who have more than the bare minimum understanding of SEO. Ditto the number of PR companies that have SEO specialists on their books. And when I talk about SEO I mean organic SEO, not PPC. That’s a different, albeit highly skilled, discipline.

I’m not talking knowledge of social media here. We, as an industry, switched on to its potential years ago. I’m talking about the ability to understand the strategic context behind SEO then make tweaks to your practice accordingly. How many PR agencies consider SEO when they’re coming up with PR strategies for clients? How many PRs write blogs and truly understand how to optimise them for Search? And I’m not talking keyword stuffing here either. There’s a hell of a lot more to writing and promoting a blog post than bunging in a few buzzwords.

Why the reluctance of PR consultancies to go where the demand, and hence the money, is? Here are a few common misconceptions among PR practitioners, which, perhaps, explain things:

It’s all about spammy link-building. WRONG. In so many ways. And, hey guys, it’s not like we have our troubles to seek as an industry when it comes to reputation.

#B: SEO’s a subset of marketing

WRONG. SEO’s not a subset of anything, it’s a thriving, vibrant industry which does not need a sugar daddy. And hey, what’s wrong with marketing anyway.

#C: SEO’s a young whipper snapper only just out of its teens

And if PR and SEO are indeed converging, the 100-year-old PR industry deserves to snaffle it up.

WRONG. There are people out there who have 20 years’ experience in this area and we would do well, as an industry, to soak up their knowledge. I know I’ve learned a lot in life from my little brother.

The big opportunity for the PR industry though is content marketing, an increasingly key element of SEO. But we need to get with the programme and understand SEO first before we become effective content marketers.

#D: SEO is all about tactical execution

WRONG. There are loads of SEO and digital marketing agencies fighting for that centre, strategic ground, traditionally occupied my PR or marketing agencies. Increasingly, larger PR consultancies won’t be up against the usual suspects at pitch, it’ll be full service agencies covering a number of disciplines. From a client’s perspective, surely it makes sense to have the same agency doing your analytics and measurement, your technical SEO, your content marketing, your stakeholder/influencer engagement, your proactive and reactive media relations?

#E: SEOs are in the same boat as PRs

SORT OF. While some progressive large PR agencies are restructuring their teams to react to this new trend, for many it’s like turning a supertanker. And the only answer for smaller agencies is individuals retraining and adding more strings to their bows. And what about SEOs? Yes there are smaller SEO outfits focussed on traditional SEO, creating white hat backlinks which undoubtedly still boost clients’ all-important search engine rankings. But larger SEO agencies offer the full-range of digital marketing services, including the all-important and mushrooming field of content marketing. Some employ PRs also, to deliver those crucial high page authority backlinks provided by established news media. PR as a subset of SEO!

Incidentally, for journalists, content marketing is, in many respects, the new PR. Less so in Scotland but certainly in London and the States, a plethora of talented writers honed in the art of who, what, why, where, when and how are jumping ship and getting on the content marketing bandwagon. In the first few months they’ve learnt the SEO basics, from those that know, and are motoring.

So, all very well you might think but why should I listen to this guy?

This guy that is seemingly biting the hand that’s fed him over the last 17 years.

For all the hitherto-uninterested-in-SEO PRs reading this, at whatever level of seniority, I was you a year or two ago. Social media, yeah, totally saw the value in that. But wider digital marketing, content marketing, SEO…you’re having a laugh aren’t you. I obviously liked working with fellow professionals on integrated communications campaigns but all of this was paid media, I sniffily thought. I’m an ex-journalist, an award-winning PR…I don’t do paid media.

Deciding to write a blog, leaving corporate life, and setting up my own Glasgow PR firm has changed all that. I now see things through a client’s eyes.

I’ve lost the silo mentality and, like a giraffe, have been able to put my ahead above the enclosure, have a look around and see how the world, and communications with it, is changing. I’ll be blogging, from a PR perspective on this new nexus between design, content marketing, SEO and public relations regularly over the coming months. But as a start, and for what it’s worth for fellow PRs for whom all this sounds a bit scary, here’s my top tips on how you too can achieve that SEO awakening.

#1: Check out various blog posts on the subject of PR and SEO

Here’s a selection, from:

#2: Get these blogs in your Feedly

SEO changes all the time so you need to be on top of it. These are my top 12 (sorry to those I’ve left out). And don’t read them, devour them, and bookmark them for later. But keep up, many of these guys blog daily. And curate, adding a bit of your own personality along the way. Number 13′s not a blog but widely recognised as the best beginner’s guide to SEO.

Second thoughts, just click on this link to the 12 best SEO blogs. Kyle Chin’s saved me a job.

Make use of your first two weeks’ BuzzSumo to identify them.

Share their stuff and chat. When you understand more about SEO, you’ll have more to contribute. Until that day, don’t expect many of them to follow you back. It’s nothing personal, apart from your low Klout score and your two Tweets a day, courtesy of Riffle.

#4: Get involved with debating the topic on LinkedIn forums and Google+ Communities

Such as prredefined.org. If you’re a CIPR member, or an Accredited Practitioner like me, it’s incumbent on you to get involved with this debate. Is SEO taught as part of PR courses in universities? Should you SEO a blog post? What tools can you use to make SEO easier? You can help others. Share your knowledge. It will even contribute towards your CPD.

#5: And the secret ingredient?

There’s no substitute for putting in the hours/months/years. It obviously helps if you have your own website to SEO and see the effects of your actions. But there’s nothing to stop you setting up your own blog, learning and applying basic SEO principles, and connecting it to Google Analytics to see the results. Find something you’re passionate about and write about it. I did.

This is all just scratching the surface and I’ll cover the subject in more detail in future posts. But to summarise, it’s about time the PR industry underwent a rude awakening and realised that SEO and content marketing are in danger of leaving it behind. Less talk about how these areas should really be considered part of pubic relations and more getting up to speed with what is a fascinating, exciting and fast-moving area. After all, while your organisation’s ranking on Google Search is not the be all and end all (there are other ways of reaching your audience:O) it is pretty damn important, whether you’re trying to sell a product or an idea.

It’s a steep learning curve but, as CIPR President Stephen Waddingtoncontextualised it during a recent talk in Glasgow, digital marketing is a fantastic opportunity for PRs. We can now reach audiences direct, without the filter applied by the mass media.

People like Richard Branson (6.8m followers on LinkedIn) have woken up and smelt the coffee.

It’s about time we all did too!